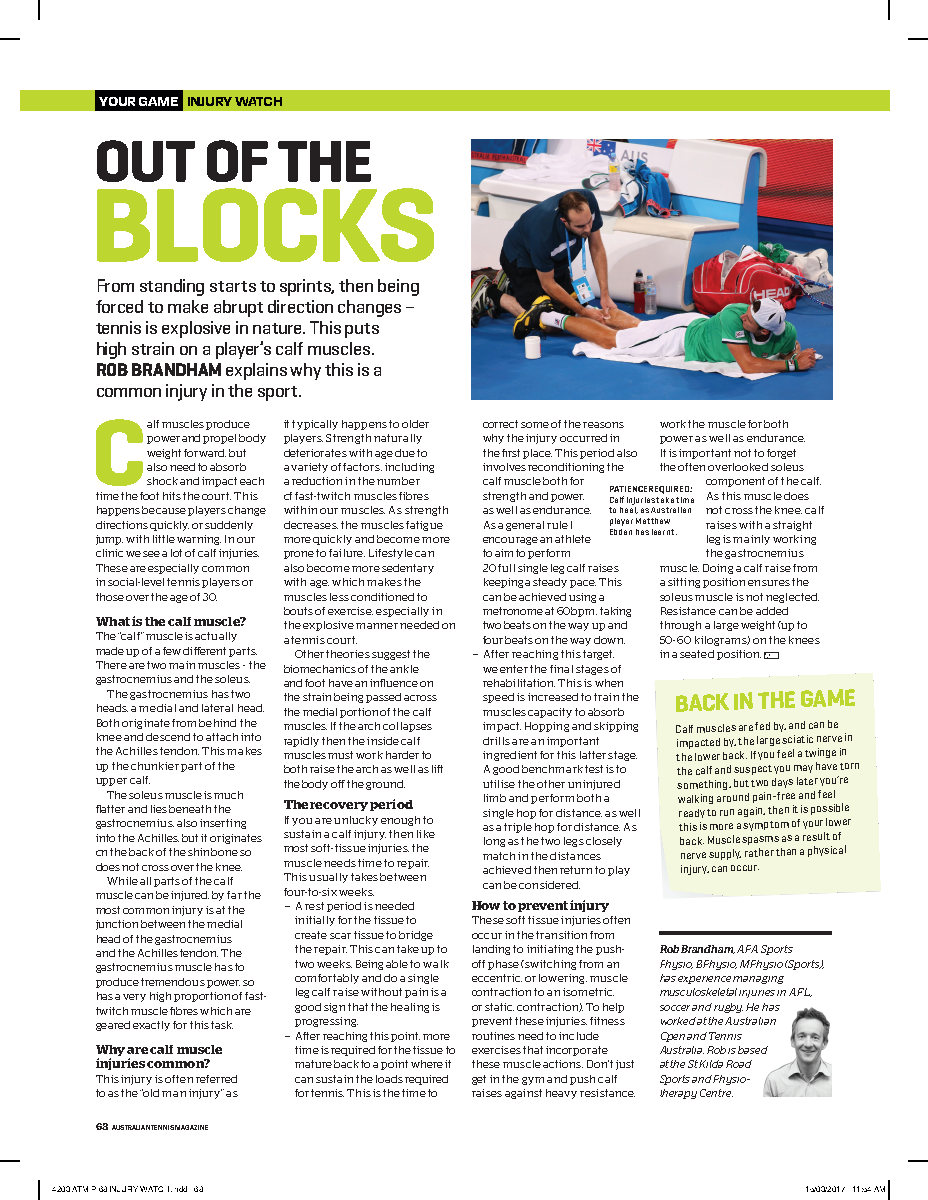 OUT OF THE BLOCKS

From standing starts to sprints, then being forced to make abrupt direction changes – tennis is explosive in nature. This puts high strain on a player’s calf muscles. ROB BRANDHAM explains why this is a common injury in the sport.

As a tennis player you have to change directions quickly or suddenly jump with little warning. This requires the calf muscles to not only produce power and propel body weight forward, but also to absorb shock and impact each time the foot hits the court. In our clinic we see a lot of calf injuries. These are especially common in social-level tennis players or those over the age of 30.

What is the calf muscle?

The “calf” muscle is actually made up of a few different parts. There are two main muscles – the gastrocnemius and the soleus.
The gastrocnemius has two heads, a medial and lateral head. Both originate from behind the knee and descend to attach into the Achilles tendon. This makes up the chunkier part of the upper calf.
The soleus muscle is much flatter and lies beneath the gastrocnemius, also inserting into the Achilles, but it originates on the back of the shin bone so does not cross over the knee.

While all parts of the calf muscle can be injured, by far the most common injury is at the junction between the medial head of the gastrocnemius and the Achilles tendon. The gastrocnemius muscle has to produce tremendous power, so has a very high proportion of fast-twitch muscle fibres which are geared exactly for this task.

Why are calf muscle injuries common?
This injury is often referred to as the “old man injury” as it typically happens to older players. Strength naturally deteriorates with age due to a variety of factors, including a reduction in the number of fast-twitch muscles fibers within our muscles. As strength decreases, the muscles fatigue more quickly and become more prone to failure. Lifestyle can also become more sedentary with age, which makes the muscles less conditioned to bouts of exercise, especially in the explosive manner needed on a tennis court.

Other theories suggest the biomechanics of the ankle and foot have an influence on the strain being passed across the medial portion of the calf muscles. If the arch collapses rapidly then the inside calf muscles must work harder to both raise the arch as well as lift the body off the ground.

If you are unlucky enough to sustain a calf injury, then like most soft-tissue injuries, the muscle needs time to repair. This is usually between four-to-six weeks.

How to prevent injury

These soft tissue injuries often occur in the transition from landing to initiating the push off phase (switching from an eccentric (or lowering) muscle contraction to an isometric (or static) contraction). To help prevent these injuries, fitness routines need to include exercises that incorporate these muscle actions. Don’t just get in the gym and push calf raises against heavy resistance, work the muscle for both power as well as endurance. It is important not to forget the soleus component of the calf which often goes overlooked. As this muscle does not cross the knee, calf raises with a straight leg is mainly working the gastrocnemius muscle. Doing a calf raise from a sitting position ensures the soleus muscle is not neglected. Resistance can be added through a large weight (up to 50-60 kilograms) on the knees in a seated position. 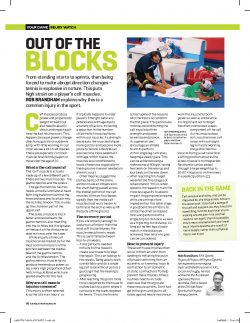 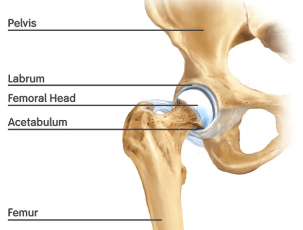 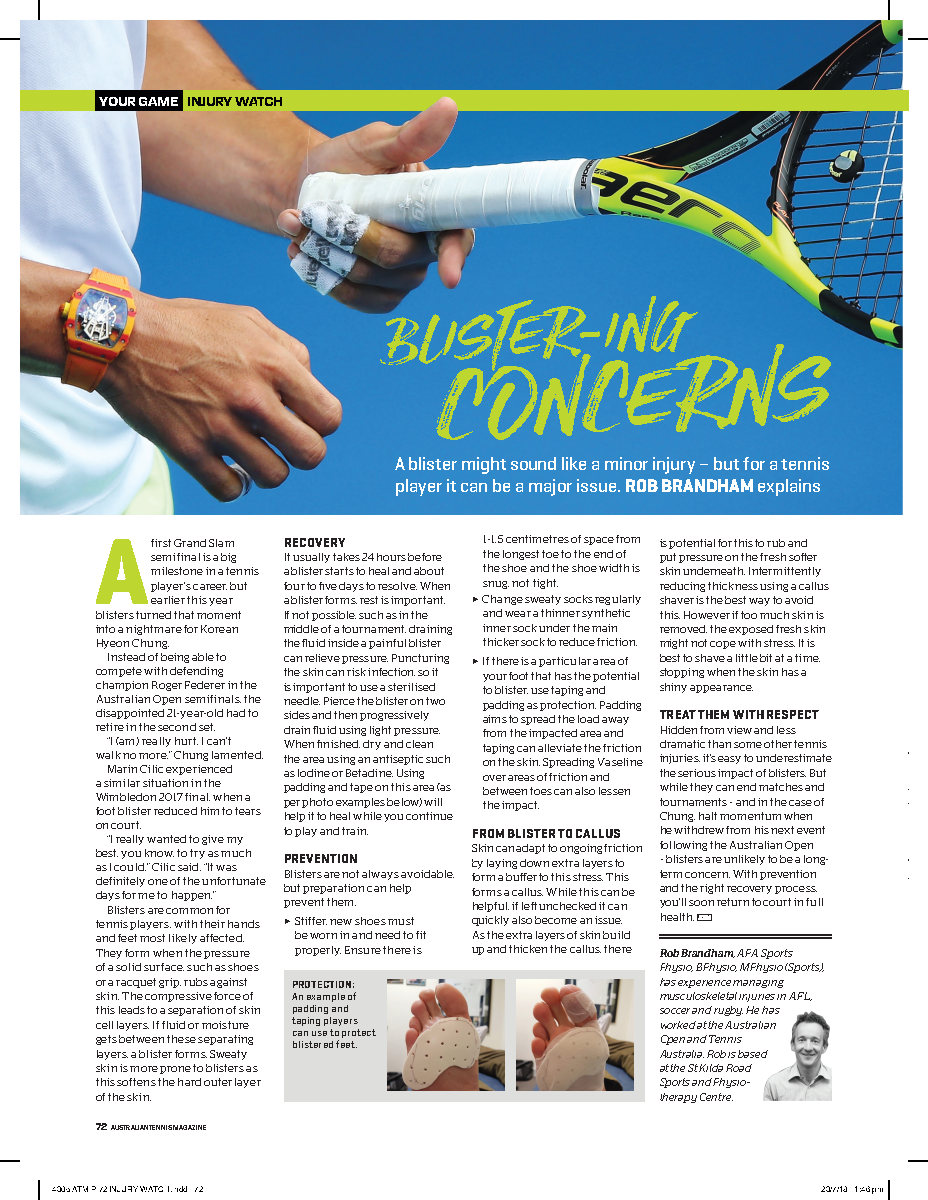